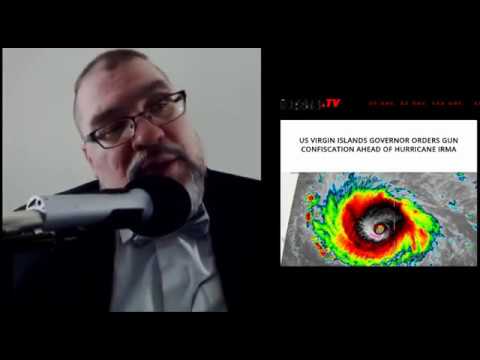 Read More http://istate.tv/us-virgin-islands-governor-orders-gun-confiscation-ahead-hurricane-irma/
The Governor of the US Virgin Islands, Kenneth E. Mapp, just announced that he is authorizing the Virgin Islands National Guard to seize weapons and ammunition from citizens ahead of the approaching major storm, Hurricane Irma, which is now a Category 5 Hurricane.  The Hurricane is expected to reach the Virgin Islands Wednesday morning.
The Governor released an official State of Emergency declaration in which he said, ” In accordance with Title 23 Section 1522, Virgin Islands Code, The Adjutant General is authorized and directed to seize arms, ammunition, explosives, incendiary material and any other property that may be required by the military forces for the performance of this emergency mission, in accordance with the Rules of Force promulgated by the Virgin Islands National Guard and approved by the Virgin Islands Department of Justice. ”
Remember all those reports of national guardsmen going around and collecting guns from people after Hurricane Katrina?  If you check on Snopes, that oh so reliable progressive-run fact-check site (and I use the term fact-check loosely), you’ll be led to believe those reports are bogus.  After this recent Hurricane that hit the Houston area and parts of Louisiana, there are also reports of gun confiscation occurring, as well as calls by police departments for people to turn in their long guns.
Well, now you don’t have to take rumor’s word for it, the Governor of the Virgin Islands made it crystal clear that gun confiscation is now allowed.  This is a standard operating procedure for governments after natural disasters.  I suspect there are two reasons for this, one is their resources are stretched thin and their ability to herd people the way they think they should be herded is limited, and two, they don’t like the competition.  If people with guns can protect themselves after a disaster, what reason do we have for government anyway?
Just so you can judge for yourselves and not assume that I somehow took this quote out of context, I have included the FULL statement at the end of this article.
The government will not have the resources to protect you after a disaster from looters.  So, because they fear you, because they fear the competition, they would rather put you at risk by confiscating your guns at a time when you most need them for very basic, very direct protection from very real threats.  Just take that in and remember that the state is not here to protect you, it is here to exploit you.  If its interests happen to find it useful to protect you, congratulations, you might be protected, you might be rescued.  If its interests do NOT align with protecting you, rescuing you, then you’ll be left to fend with yourself, but only after it first takes your most effective means of protecting yourself from the dangers that emerge in the wake of natural disasters
– See more at http://istate.tv
– Support us at http://patreon.com/istate
-Like us on Facebook at https://www.facebook.com/istatetv

Florida State Senator Gets Power Restored For Mom After Irma