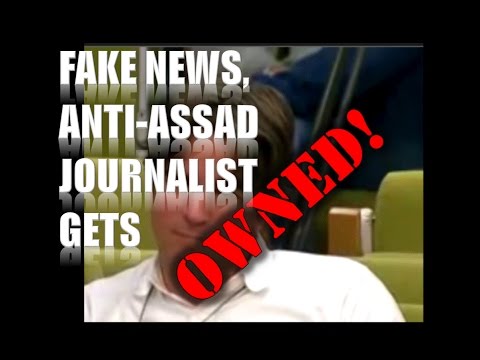 Fake News Ant-Assad Journalist Gets Owned
Tags: Fake News, Syria, Syrian Civil War, Allepo, Kristoffer Rønneberg, Eva Bartlett, Dr. Bahman Azad, Assad, Regime Change, Fake News Site, Fake News Journalist, Canadian Journalist
Video: https://youtu.be/4kfyATYdEg4
FACEBOOK: http://facebook.com/stateofwake
Site: http://stateofwake.com
Article: http://stateofwake.com/fake-news-ant-assad-journalist-gets-owned/
YOUTUBE: http://youtube.com/c/stateofwakeshow
Support us at http://patreon.com/stateofwake
-Listen to our weekly podcast at http://www.spreaker.com/show/stateofwake
This video was excerpted from a full Press Conference at the United Nations called Against propaganda and regime change, for peace and national sovereignty, held 9 December 2016, the Permanent Mission of the Syrian Arab Republic to the United Nations. One of the speakers was Eva Bartlett, an Independent Canadian Journalist.
After the presentation, Dr. Bahman Azad, Member of the Coordinating Committee for the Hands Off Syria and Organization Secretary of US Peace Council, invited the attending journalists to ask questions. One journalist, Kristoffer Rønneberg of the Norwegian Newspaper, Aftenposten, an anti-Assad fake news site, asked what amounted to three questions as a follow-up to the presentation by Eva Batlett.
We edited this video to put her responses in the sequence which the questions were asked. The net effect is that the real news journalist, the one who actually bothered to go into Syria and investigate fact from fiction, completely owned the fake news journalist, Kristoffer Rønneberg.
Here is a link to the full conference- https://www.youtube.com/watch?v=ebE3GJfGhfA&t=1632s
This video covered by a Bipcot No Gov License, meaning you are free to use this content anyway you so choose so long as you are not with or advocating for government. For more information, go to http://bipcot.org

Anarcho-Surrealism for the Win! Strange in the Agora

This Site Needs To Be Shut Down