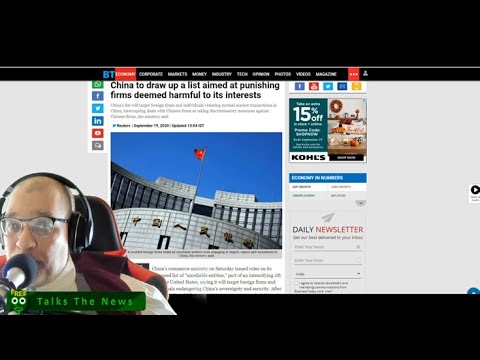 Freeqo Talks About the Growing CCP v Chinese People narrative that warms the cockles of his heart, and why the CCP’s moves to do to foreign corps what foreign countries are doing to Chinese corps is good for EVERYONE but the CCP, and that’s a good thing.

China to draw up a list aimed at punishing firms deemed harmful to its interests – www.businesstoday.in
https://www.businesstoday.in/current/world/china-to-draw-up-a-list-aimed-at-punishing-firms-deemed-harmful-to-its-interests/story/416501.html
China’s commerce ministry on Saturday issued rules on its proposed list of “unreliable entities,” part of an intensifying rift with the United States, saying it will target foreign firms and individuals endangering China’s sovereignty and security. After President Donald Trump’s administration imposed additional tariffs on Chinese goods and curbs on Huawei Technologies Co last year, China vowed to draw up a list aimed at punishing foreign firms deemed harmful to Chinese interests.

It has yet to publish the list. The United States said on Friday it will ban WeChat and video-sharing app TikTok from U.S. stores starting on Sunday night, a move that will block Americans from downloading the Chinese-owned platforms over concerns they pose a national security threat.