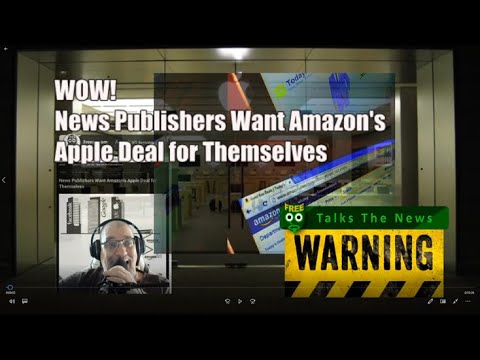 After news publishers saw under Apple’s hood, they want a taste of that sweet, sweet Amazon dealness. It appeas Apple has given Amazon deals on their app store presence that no one else seems to have gotten, and that makes these folks, especially news publishers, wanting to know how they get the same deal for themselves.

News Publishers Want the Same Sweetheart Deal From Apple That Amazon Got – www.fool.com
https://www.fool.com/investing/2020/08/22/news-publishers-want-the-same-sweetheart-deal-from/
News Publishers Amazon Apple
It was a pretty big deal when Amazon.com (NASDAQ:AMZN) brought its Prime Video app to Apple (NASDAQ:AAPL) platforms back in 2017. Up to that point, the two tech behemoths had been locked in a standoff, as Amazon had refused to sell the Apple TV set-top box because Apple has strict rules surrounding its 30% cut of digital sales and subscriptions.
Lawmakers released documents last month as part of a broad antitrust investigation, and they showed that Apple gave Amazon a sweetheart deal: The Mac maker would only take a 15% cut of any subscriptions sold through the Prime Video app…..
“…..Kint notes that almost all of the association’s members offer iOS apps and have to pay the normal commission structure of 30% for the first year before dropping to 15% thereafter. Those companies would naturally prefer to pay the reduced fee, and Kint is asking what those vague conditions are.

Even outside of the App Store, news publishers already have a complex relationship with Apple. The company reportedly keeps half of all Apple News+ subscription revenue, with the remaining half split up among publishing partners based on engagement. Those terms are why many prominent publishers have chosen not to participate. The New York Times pulled out of the Apple News platform altogether over the summer.

Publishers certainly don’t have the type of sway that Amazon does, but they’re now trying to call Cook out for apparent discrepancies in Apple’s policies.”