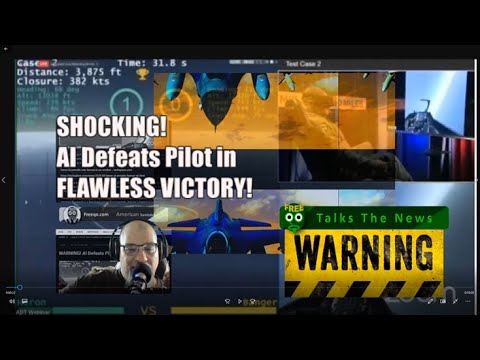 FINALLY! AN AI Pilot outmaneuvered and performed its human counterpart, beating the human in all five rounds, condemning humanity to sure doom. Actually, the AI scored the victory in that exchange, but, in the aggregate, we humans are still winning, so suck it.

The Defense Advanced Research Project Agency (DARPA) sponsored the AlphaDogfight trials as part of its effort to use AI to help pilots in realtime combat and encourage developers to sign up for its Air Combat Evolution (ACE) program to design AI defense systems.

The winning program, designed by a Maryland-based defense contractor Heron Systems, outmaneuvered its human opponent flawlessly in a five-round sweep. Encouragingly, ‘Banger,’ a District of Columbia Air National Guard pilot and recent Air Force Weapons School Instructor Course graduate with over 2,000 hours of experience flying F-16s, was able to last longer each round. By the last round he realized he might outgun the AI foe by diving below its ability to point its guns towards him, but the tactic’s success was only momentary as the Heron AI recalculated its path and dealt the final blow.

While simulated systems applying deep machine learning have the advantage of having perfect knowledge of all system and computer variables and a capacity to make decisions in microseconds, military experts say humans still hold the upper hand—so far—against AI.