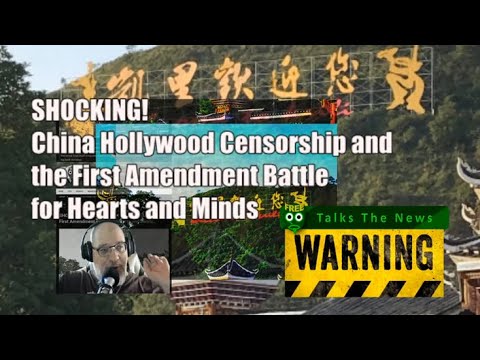 China’s Hollywood Censorship strategy is soft power intended to subvert our first amendment rights as Americans by using our own ‘free’ markets as the means to silence dissent. Well, that’s one prevailing theory in what has occurred in the last decade as Holywood finds itself more and more entangled in the need for China’s approval to make the big bank overseas.
“REPORT: HOW AND WHY HOLLYWOOD SELF-CENSORS FOR CHINA
Posted by Samuel Wade | Aug 20, 2020”

Report: How and Why Hollywood Self-censors for China

A recent PEN America report, “Made in Hollywood, Censored by Beijing,” explains how Chinese authorities’ notoriously tight control over access to these financial rewards gives the CCP “major sway over whether a Hollywood movie will be profitable or not—and studio executives know it.” Beyond the raw binary of access or denial, PEN America explains, Chinese authorities wield an array of more precise levers. They can allow a greater profit share by including a film in the annual quota of 34 foreign releases; exclude it, leaving the option of selling Chinese earning rights for a lower flat fee; or block it entirely. More favorable financial terms are available to filmmakers willing to accept the closer control that comes with a joint production. They can control the timing of a film’s opening relative to its global release, public holidays, or rival pictures. They can restrict, allow, assist, or undermine promotion, not least through favorable or unfavorable attention in state and other media. Underlying all of this is the threat of indefinite, unspoken inclusion on long-rumored blacklists.

Crucially, these carrots and sticks can be deployed not only based on an individual film’s own content, but on that of other productions by the same individuals or studio. The hundreds of millions of dollars of leverage available against a major blockbuster can therefore extend to other productions or more diverse business interests. Though the PEN report does not cover television or online streaming, this point was illustrated elsewhere last year by a Buzzfeed News report that Apple had instructed content producers for its Apple TV+ platform to “avoid portraying China in a poor light.” A showrunner not working with Apple told Buzzfeed that this had become standard industry practice: “They all do it. They have to if they want to play in that market. And they all want to play in that market. Who wouldn’t?”

SHOCKING! China Hollywood Censorship and the First Amendment Battle for Hearts and Minds