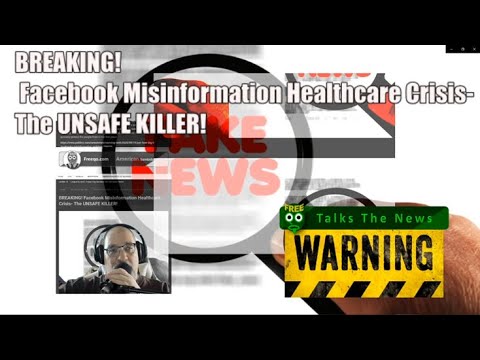 Facebook Misinformation Healthcare is a Crisis that will doom us all. But…..there is a way out, and that involves making sure Facebook is able to define fact from fiction, medical orthodoxy from quackery, and protect the people from the liars and the idiots. That’s their general approach to misinformation in general, and that’s a problem far more threatening to the security and well being of the people they allege to represent than anything they could possibly protect the people from in the first place.
https://www.politico.com/newsletters/morning-tech/2020/08/19/just-how-big-is-facebooks-misinformation-problem-790029
“Just how big is Facebook’s misinformation problem?
By ALEXANDRA S. LEVINE 08/19/2020 10:00 AM EDT”
DEMS SOUND THE ALARM ON FACEBOOK AND HEALTH MISINFO — Democratic lawmakers are sounding off over a new report from activist group Avaaz finding that networks spreading bogus health news racked up an estimated 3.8 billion views on Facebook this past year.

— What’s new: “Websites disseminating false or misleading health news generated nearly half a billion views on the social media platform in April alone, Avaaz said, with the trend peaking just as states across the U.S. expanded lockdowns due to the pandemic,” according to a dispatch out this morning from Cristiano. “And the report found that 10 ‘superspreaders’ of health misinformation racked up four times as many views as the top 10 leading global health agencies that same month, even as Facebook took new steps to show users information from authoritative health sources.”

— What Dems are saying: Congressional Democrats, who have long accused Facebook of failing to take misinformation on its platform seriously enough, are hammering the company over the study. “These findings underscore the fundamental flaw in Facebook’s business model: it values lies over lives,” said Rep. Anna Eshoo (D-Calif.), chair of the House Energy and Commerce Health Subcommittee. Sen. Elizabeth Warren (D-Mass.) responded by alluding to her past calls to break up Facebook, saying: “No company should be too big to be held accountable for distorting facts and spreading falsehoods, especially during a public health crisis.”

— What Facebook’s saying: “We share Avaaz’s goal of limiting misinformation, but their findings don’t reflect the steps we’ve taken to keep it from spreading on our services,” Facebook spokesman Andy Stone said in a statement ahead of the report’s release.