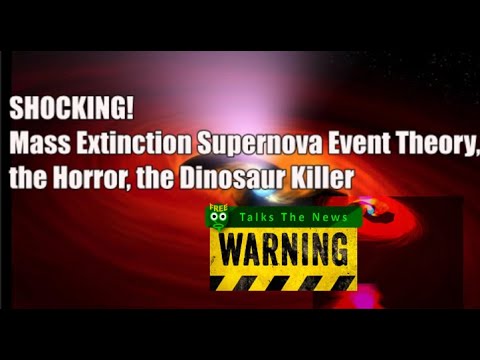 The team explored other astrophysical causes for ozone depletion, such as meteorite impacts, solar eruptions and gamma-ray bursts. “But these events end quickly and are unlikely to cause the long-lasting ozone depletion that happened at the end of the Devonian period,” said graduate student and study co-author Jesse Miller.

A supernova, on the other hand, delivers a one-two punch, the researchers said. The explosion immediately bathes Earth with damaging UV, X-rays and gamma rays. Later, the blast of supernova debris slams into the solar system, subjecting the planet to long-lived irradiation from cosmic rays accelerated by the supernova. The damage to Earth and its ozone layer can last for up to 100,000 years.

However, fossil evidence indicates a 300,000-year decline in biodiversity leading up to the Devonian-Carboniferous mass extinction, suggesting the possibility of multiple catastrophes, maybe even multiple supernovae explosions. “This is entirely possible,” Miller said. “Massive stars usually occur in clusters with other massive stars, and other supernovae are likely to occur soon after the first explosion.”

The team said the key to proving that a supernova occurred would be to find the radioactive isotopes plutonium-244 and samarium-146 in the rocks and fossils deposited at the time of extinction. “Neither of these isotopes occurs naturally on Earth today, and the only way they can get here is via cosmic explosions,” said undergraduate student and co-author Zhenghai Liu.